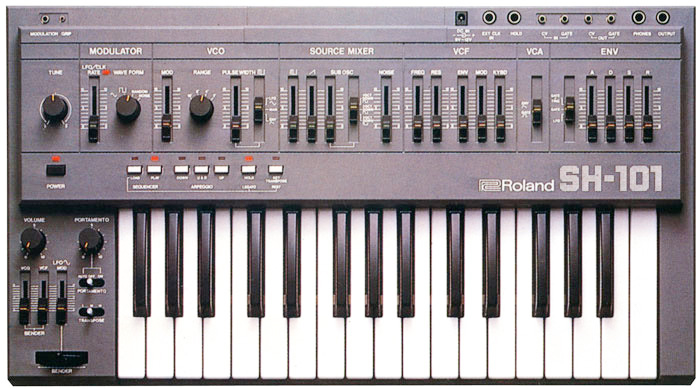 One of the most iconic electronic musical instruments Roland has ever produced. When you hear people talking about the analog synths of yesteryear, how their lack of digital microchips and circuits constitutes some kind of pure electronic soul, it's the buttery smooth sound of the Roland SH-101 that everyone's really alluding to. The warm rubbery bass and tasty leads you can get out of the SH-101, not to mention the weird spacey FX and modulated noises you can make, are legendary in electronic music, especially on techno and house tracks.

There are many reasons why this grey monophonic keyboard, essentially a keytar judging by the way it was advertised, has so much going for it, but to really understand what makes the SH-101 so special I would encourage you to just look at the thing. It’s beautifully simplistic, everything is right there in front of you at the touch of a knob or slider. There are no menu systems, no shift button or secret key presses, the position of each slider elegantly illustrates what’s currently being heard. The built-in sequencer can get a little hairy to work with at times but the SH-101 is an honest piece of gear, everything it’s capible of is apparent from first glance. And it’s simply a pleasure to look at and use.

But the filter on this thing, god damn. The 24db lowpass filter on the SH-101 is powered by the Roland IR3109 filter chip which has a legendary synth pedigree given it’s the same magic that brings the filters of the Juno 106, Jupiter 4, Jupiter 6, Jupiter 8, Juno 6, Juno 60, and JX3p to life (almost every classic Roland people care about). The thing oozes warmth and character in all of the ways a smooth filter should. The filter can be made to self-resonate which produces a super secret 4th waveshape, a sine wave, and can be used to add nice harmonic content to your existing sound, or through the magic of keyboard tracking, can simply be played on its own. The self-resonant sine wave is the technique I hear used the most when programming the SH-101 for spacey FX and out-of-this-world noises.

Oh yeah and the envelope response on this thing is quick, twangy, and snappy, great for anything but especially for arpeggiated sounds and percussive noises. Though there is only 1 envelope on board, you can use it to control the filter, VCA, and pitch (sort of). And unique to the SH-101, the filter can be set to gate normally, retrigger (either via the sequencer or Gate In), or be triggered by the internal LFO. While clearly a symptom of the instrument’s modular roots, an envelope implementation such as this lends itself to many of the sounds the SH-101 is revered for (namely thick basses, wonky techno sequences, weird glitchy FX, and resonant grooves).

Furthermore, there’s a switch that allows you to change how the VCA behaves. Setting it to Gate allows sound to pass through once you hit a note (and stop when you take your finger off the key). But setting it to Env will, as you can imagine, applies the afformentioned envelope to the amplitude of the patch, giving you more control over the loudness and expressiveness of your sound. Combine this feature with an external trigger or gate source, especially something with variable velocity or an off-beat clock, and you have yourself an instant techno party.

Another reason why artists heap so much praise onto the SH-101 comes from those CV and Gate in/outs. Though limited, these two sets of jacks qualify the SH-101 as a “semi-modular” synthesizer, opening the instrument up to an entirely different dimension of sound design.