When was the last time someone introduced themselves as a folklorist? Like a career in newspaper writing, folklorist is one of those obscure and eccentric professions that attract only the most humble and dedicated yet a career which, upon reflection, might have one of the most outsized impacts on American culture and history.

One of those few souls who’ve spent their entire lives traveling the world and recording all there is to archive were Alan Lomax and his father John Lomax, and unbeknownst to me, Alan and John were likely some of the most well known modern folklorists to have practiced the craft (at least in the United States). 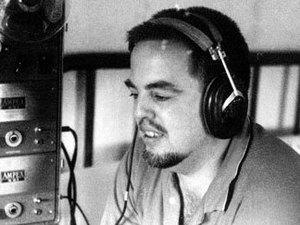 Even though this episode was a rebroadcast of an interview Terry Gross did in 1990, Alan Lomax’s sit-down in the Fresh Air studios made for some very captivating radio. As folklorists and ethnomusicologists, the Lomax family roamed the globe recording field audio, that is, sound captured in the intimacy of the real world, of singers, musicians, and everyday folks living in some of the most remote and downtrodden parts of the world. They recorded southern chain gangs singing work hymns (audio which was later used in the movie O Brother, Where Art Thou?), cowboys strumming on guitars singing range songs (deemed “too hot” for radio play), and perhaps most famously, recorded the legendary folk singers like Woody Guthrie, Lead Belly, Muddy Waters, and even Jelly Roll Morton among others.

In his interview, Alan Lomax recounts a variety of stories from his noteworthy life. He speaks about why many of his early musical projects were recorded in prisons or were retold through the voices of murders and convicts, how he struggled against the Library of Congress and their censorship policies (Woody Guthrie’s classic “This Land Is Your Land” was apparently too vulgar for their standards), and discusses his belief on the need for culture and music to be preserved through the folklorist’s traditions and techniques.