Every morning when I wake up I like to immediately hop on the internet and check hasthelargehadroncolliderdestroyedtheworldyet.com, you know, just to make sure those brainy scientists over at CERN haven’t destroyed the world yet. From the moment it was brought online in 2008, and all of the ~mysterious~ circumstances that it has suffered throughout that process (birds dropping breadcrumbs and all), I can’t remember a single scientific experiment inspiring so much unjustified fear and panic from the public as the Russian Doomsday machine/Swiss cyclotron (known as the Large Hadron Collider) hath wrought.

For all of the speculation about our impending end-times though, there really has not been a lot of news coverage around the LHC beyond scientific peer-review journals like Nature and Science. Well, except on Nation Public Radio of course. 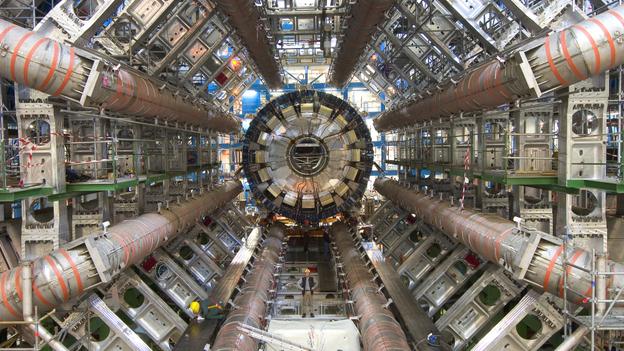 If it were not for the December 28th segment on All Things Considered titled The Hunt Is On: Massive Collider Churning Out Data, I’d still be blissfully unaware that the physicists at CERN have actually done anything the past few months. After what had proven to be an awkward teenage growth phase for the LHC, teams of scientists have since been able to successfully smash particles into each other for some time. And now, after all those initial fireworks, the data has been gathered and the real science can begin.

Armed with a steady stream of information (Eiffel Tower-sized stacks of DVDs being spit out every day) physicists at the ATLAS lab are now able to begin their long sought quest to discover new particles both theoretical and unknown. Like an unemployed 99er finally getting that job opportunity, you can hear the excitement in these PhDs’ voices as they explain how they can actually get down to their real work now, and appropriately for radio, researcher Steven Goldfarb even sings a little song about how he’s been living under his desk now that all this important science remains to be done.

While the LHC was stumbling it made for great headlines, but now that the particle accelerator is humming along and the vision of an almost 40-year, multi-billion dollar project has been realized, you only hear about new developments from serious news and science sources (unfortunately). Without news organizations like NPR, I’d never get a chance to learn about how the LHC does its thing. The only thing I’d have a chance to hear again and again from other news outlets is how the particle accelerator could theoretically kill me by creating a black hole. But then again, maybe this trend in low-information high-schlock reporting accounts for the paltry 4 million-ish viewers the most popular cable news networks get for their most popular programs night after night.