As we leave 2010 behind, one can’t help but reflect on the many events of the past 356 days and which one might have been the single biggest and most culturally significant let down of our time. Tragedies like the Haitian earthquake, BP oil spill, and an unsettling number of mining catastrophes were reminders of just how little control humans still lack when it comes to taming the natural world, but what about all the things humans have created and thus can shape and control?

A boardroom of executives didn’t sit down and discuss plans to devastate the nation of Haiti with an earthquake (though some might believe these kinds of decisions are predetermined by a higher power in much the same manner), but executives from financial institutions around the globe do sit down every day and hatch a variety of boiler room schemes to try and cheat the hard-working middle class out of their American Dream, such as selling people home loans they could never feasibly pay off. 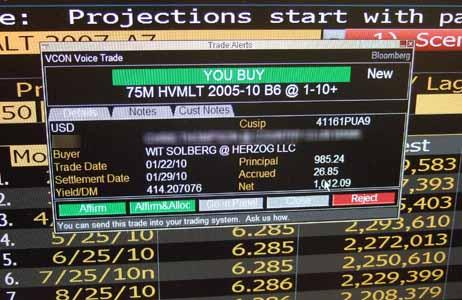 Compounding the damage of this scam was a highly technical financial product that had been created out of these bad debts and packaged together by the banks, now dealing with the fallout of all their clients’ defaults. A toxic asset, or a shitty deal as Goldman Sachs executives liked to put it, called a “mortgage-backed security” was being sold on the market like a commodity or a future might be. Banks shuffled these magical shameful assets around like a novice roulette player spreading their chips across every possible call, gambling in as many places as they could in hopes of the slightest financial gain.

This game and the resulting debt crisis was the single most important, impactful, and insulting event of 2010, but to understand the entire financial panic and grasp how so many smart and powerful bankers could let their fiduciary responsibilities fall by the wayside the intrepid journalists at NPR’s Planet Money decided to hit the streets (the Wall Streets).

To understand just how terrible a toxic mortgage-backed security could be, the Planet Money team invested in one their own and tracked the performance over the course of the security’s lifetime (which turned out to be quite short as it was purchased in April and fizzled out sometime in September).

By itself this story is an incredible example of the value NPR and Planet Money provide to the public (at no cost to you!). Not only does it showcase the value of investigative journalism but it offers a look at the creative and unique approaches those journalists take to their reporting. And once more, it contextualizes and humanizes one of the biggest financial meltdowns of our time in a way that I haven’t seen any other news organization tackle.

While the major cable news networks were going back and forth deciphering the financial crisis and deciding who deserves the bulk of the blame, NPR chose to take a more thoughtful approach and conducted a substantive experiment to learn, not speculate, about how these phony financial products work and how they compartmentalize other people’s debts into a surefire loser of an investment.

Without NPR, Planet Money, and Toxie (the toxic asset), news consumers like myself would still be completely unaware of how a few dozen financial institutions were able to package and sell an “investment opportunity” (a bunch of their own debts) designed to lose as much money as possible in the shortest amount of time possible. In a media landscape where even the most watched cable news channels struggle to explain how the financial meltdown happened, it is a breath of Fresh Air to see journalists at NPR and Planet Money put their talents to good use in packaging a story like Toxie together.